“The heavens declare the glory of God; the skies proclaim the work of his hands.” Psalm 19:1

Let me now join the world in going gaga about the supermoon.  I would have written about it the same night it appeared, but I fell asleep on the couch  with deep thoughts about it.  There is a Tagalog word “muni-muni” that means to reflect or to ponder. Funny that it actually sounds like moony-moony which I now define as reflections about the supermoon, no pun intended.

I was just as excited and curious to witness the phenomenon advertised as a once a lifetime thing.  Because I just turned 50, I thought it should be in my imaginary bucket list. 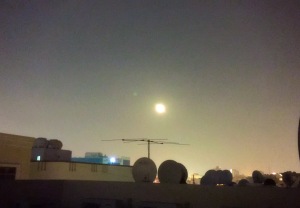 Between 5pm-6pm, when it was supposed to rise over the cluster of other rooftops around our building, I waited for that WOW moment!  It didn’t come.

But the mini-moon did.  Slowly it eased its way past the antennaes and satellite dishes that blocked my full view of it as it rose.  When its path cleared, I realized it wouldn’t get any bigger.

So was I disappointed? Yes, because I thought I would see it like others did.  But surprisingly, I didn’t care that it was tiny. It was the same moon.  How huge (or not), depends on just where we were.

Then it came, my WOW moment!  It was when I stared at the moon and see past its magnitude.  Because beyond its size, I saw a masterpiece of its Creator.

It doesn’t matter now when the next supermoon will appear.  We can experience its beauty every night, visible or not, as we look up to the sky.  There is a vast universe out there in all its splendor.  If we do a moony-moony, one day we would see Jesus come down from the heavens. Then we rejoice all the more, for the wonder of it all, no supermoon could ever match.