yesterday i experienced the scariest and weirdest moment ever.

you see, there is no company transport provided for us,  so i have to go with bhoy every morning.  that means i am always an hour and a half early for work.  that also means that it is my duty to unlock the office main door and switch on the lights. it also means that i could enjoy some peace and quiet before each stressful day.  there’s time for me to pray the rosary, retouch make-up, clean my desk, read the news and update my facebook status, even before everyone else arrives.

except for some familiar sounds that come from the kitchen, which by this time i’ve already gotten used to, nothing unusual happens.  not until yesterday morning. 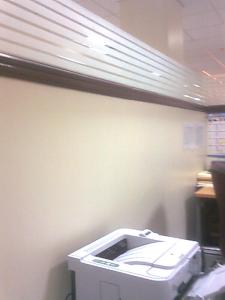 as i placed my bag and packed lunch on my desk and was about to take a seat, a loud banging on the glass part of the wall divider behind me swallowed the silence that i’ve grown to love now. BANG! BANG! BANG! as i turned to look at where the eerie noise was coming from, my heartbeat raced really fast that i felt it was out of the building within a sec.  but then, the rest of my body froze in my seat.  I WAS REALLY, REALLY TERRIFIED!!!  (thanks to my love affair with horror movies, my imagination became gory and gruesome OMG! )

the first thing that i could think of was a remote possibility that there maybe somebody locked inside the office the day before.  the second thing was oh well!  i could not think of anything more other than how scared i already was. as i sat motionless for like an eternity, i just prayed “Oh God, please don’t leave me. I’m all alone.”  minutes were transformed to forever.  you can just imagine my relief when my officemate and friend, mila, eventually arrived.  it was then that i got my heart back to its rightful place…my frightened heart that seemed to have taken a flight back home to laguna.

of course there may be spirits or souls that roam around, whose energy may have caused that really loud banging. and so, i was really wrong when i thought i was all alone.  in fact, i realized now that indeed, i was never alone. and never will be.  to quote Pope Benedict XVI during Sunday’s Angelus prayer, he stressed: “Every time we recite Our Father, our voice becomes entwined with that of the Church, because those who pray are never alone.” http://www.catholic.org/international/international_story.php?id=37525

in connection to my weird experience yesterday, this legend about the cherokee indian youth’s rite of passage was sent to my email this morning. here goes:

his father takes him into the forest, blindfolds him and leaves him alone.  he is required to sit on a stump the whole night and not remove the blindfold until the rays of the morning sun shine through it.

he cannot cry out for help to anyone.  once he survives the night, he is a MAN.  he cannot tell the other boys of this experience, because each lad must come into manhood on his own.

the boy is naturally terrified.  he can hear all kinds of noises.  wild beasts must surely be all around him.  maybe even some humans might do him harm.  the wind blew on the grass and the earth, and shook his stump, but he sat stoically, never removing his blindfold.  it would be the only way he could become a man!

finally after the horrific night, the sun appeared and he removed his blindfold.  it was then that he discovered his father sitting on the stump next to him.  he had been at watch the entire night, protecting his son from harm.

we too, are never alone.  even when we don’t know it, God is watching over us, sitting on the stump beside us.  when trouble comes, all we have to do is reach out to Him.

Moral of the story:  Just because you can’t see God, doesn’t mean He’s not there.

oh yes God is always with me.  but question is, am i with him? or will i rather be elsewhere? how many times did i go astray and got lost along the way? do i sometimes get ahead of Him who is supposed to lead me instead?

next time any sound breaks that precious silence again,  my prayer is that the presence of God would build up my courage and strengthen my faith.  let it be a resounding assurance that He will never ever leave me, even when most of the time i am not worthy.