it’s the beginning of a work week.  and because i turned down the job offer a couple of weeks ago for the good of the whole family, my  mornings starts almost exactly as it did yesterday.  and the day before that, and before that…and again, because the last time i stepped in an office was five months ago, it’s now all automatic.  morning prayers, breakfasts, dishes, clean-up, laundry.  scrapbooking and blogging in between. oh! and dinners too.  home-cooked meals ready when my husband and son check in from work and school respectively.  that’s about it.  my daily routine.  my assigned tasks.  my job description for the moment. 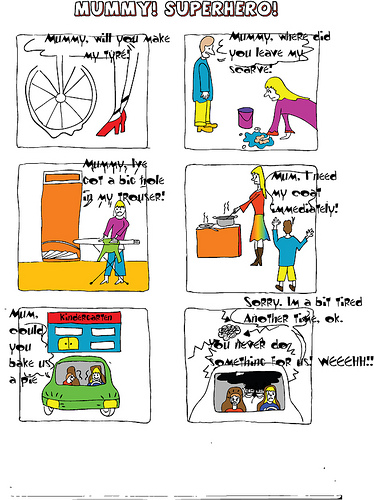 as i wander around in the kitchen still half asleep, half awake; i imagine what my day would turn out today and thought about the importance of what i do everyday.  i wondered what its relevance is to the world and what contribution i am making to the benefit of mankind.  and i can’t help but smile.  what a grand line of thinking that was.

i may not be that wise, nor powerful, nor of noble birth.  but we are God’s children.  and i believe that no matter how simple my tasks today may seem, God put me here at this moment to fulfill them.  and if done for the glory of God and for the good of even one or two people for that matter, they will count as important and relevant in His eyes.  for my life is intertwined with everyone else’s life. the great and simple alike. and if only for that, i shall live through my life each day with total submission to the will of my Father who loves me. no matter how simple and ordinary i may be.

“Jesus looked at them and said, “For human beings this is impossible, but for God all things are possible.”  Matthew 19:26

for over a week now, we are being awed, amazed and astonished by record-breaking performances in the Beijing Olympics of 2008.  who can ever forget the nerve-wracking feat of Michael Phelps.  he is a phenomenon.  he is a hero to other aspiring athletes.  even my teenage daughter posted on her bulletin “i love you phelps!”.  there’s quite a long list now of gold, silver and bronze medal awardees. and still counting…

i’m not really a sports person.  all i wanted to watch in the olympics  were the opening ceremonies.  but because my husband is such a fan especially with aquatics, basketball and athletics, i get to watch some of the games too.  i get excited.  and sometimes, i get lost in the game not realizing i sometimes scream to encourage some of the athletes i’m routing for.

but you know what?  i can’t help but wonder about the greatness of God in the midst of all these display of human excellence.  indeed, if such human beings can accomplish such great feats, you can just imagine how great their Maker is.  behind each athlete, i could see God’s angels pushing on. whatever nationality, whatever their religion, we are all His children. and whatever differences we may have, in these game we are all magnetized to one power source greater than any athlete could ever display.

yes the Beijing Olympics is a celebration of human strength, speed and endurance. of awesome artistic displays.  of oneness.  of brotherhood.  but amidst all these glory, it leads us back to the One source of it all.  he is the one true champion.  the greatest.  the strongest.  the fastest.  and for that, the greatest glory and praise to our Lord God who makes all these things possible. 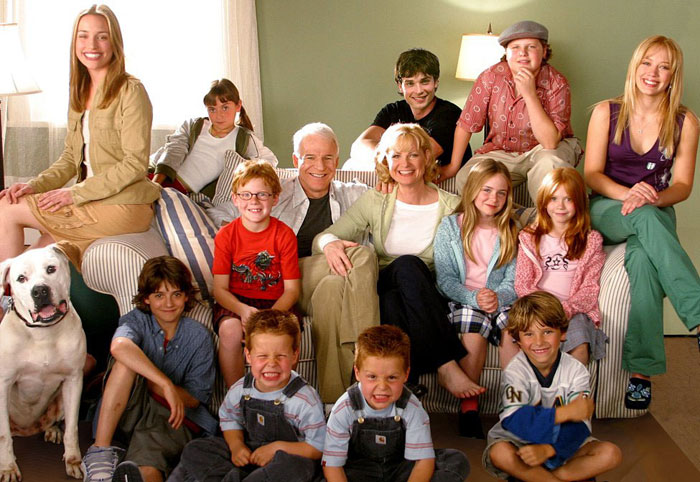 cheaper by the dozen is a movie starring steve martin, bonnie hunt, hillary duff, tom welling among others.  it is a story about a big family that is surprisingly happy despite the daily struggles that come with raising twelve kids in all. the parents dreamt of a huge family, so when the kids start coming one after the other, they decided to move to illinois away from the careers they were more than willing to give up.  all for the family.  until the father was offered a job to coach a prestigious university football team that he was once a part of. this was his big dream and with all the perks that go with the job, it was an offer that he could not resist and wouldn’t not turn down.  but this meant moving away from the home they already learned to love.  even if the kids oppose strongly to the idea to leave behind the friends and the life they knew and were  comfortable with: their simple and ‘chaotic’ rural life in illinois.  indeed, they were happy where they were.

but the father had the final say.  they moved to chicago and no sooner than they had already settled, the mother also had her dream realized.  her book was published and she was required to go to new york for two weeks for a series of book signing and tv appearances to promote her book.  this was were all the problems started.  the father was left alone to take care of the kids and the home.  at the same time he was starting to build up his career as a coach.  not yet adjusted to their new way of life, the kids began feeling neglected and their home was turned upside down.  disorganized, chaotic, and more chaotic than ever.  every one started acting like jerks.

mark, one of the younger kids had a pet frog named beans which he considered his best friend.  among all the kids, mark felt left out and that nobody cared as much for him.  so when beans died and no one seemed to care how devastated he was, mark ran away, rode on a train headed to his most favorite place in the world-their home in illinois.  this had the whole family rally together and look for mark.  and made the parents realized they made a mistake.  they realized how much more important their kids were than any career in the world.

indeed, all of us have our own grand dreams for ourselves.  it’s not a bad thing to pursue them.  but  we must include this in our list and make it number 1: to be able to raise a happy, closely knitted and God-fearing family, however big or small it may be.  you see, there’s always a retirement in careers.  when we are through, somebody else takes our place at work.  not in the case of parents. because parenthood is a lifetime contract.  at the end of the day, when we are already old and gray; when we are sick and dying;  success in our careers won’t matter much.  but although they’ve already grown, the touch of our kid’s hand to soothe us; the smile that they give back at us to make us feel better; that kiss on our foreheads and the warmth embrace each time they see us.  these are what will matter most.  the love we planted in their hearts, is the love we will harvest at our life’s sunset.

let us all take time to value our children more.  now is the time.  they are treasures that can never ever be replaced.  they are our dreams come true.  we don’t even have to pursue them at all.  they are already here.  only if we ever look at them and care.  then surely, our life’s midnights will never be cold, alone and lonely.

Hug your child today.  Just a simple gesture.  But it will make a difference.  Not only for your kid…but for you as well.

‘”..Amen I say to you, if you have faith the size of a mustard seed, you will say to this mountain, ‘Move from here to there’ and it will move.  Nothing will be impossible for you.”  Matthew 17:20-21 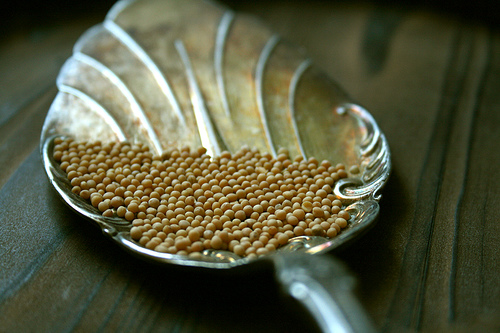 having to decide between two choices is hard enough. but three? oh it’s extremely tough now.  i was able to ask for another week from the hospital where i was interviewed before to think things over.  i agreed to their offer, which really is acceptable to me already.  what makes me hesitate though is the working hours that i have to endure.  split duty; the other half of which would require me to stay until midnight.  it’s no problem to most. but i’m not really a night person, and evenings are when our family is complete, when we can share with each other the hustle and bustle of the whole day doing each our own stuff.  so you see i’d be missing all the fun if ever.  besides, wondering what the other choice has to offer makes me stop and think awhile.

but still jittery of this new going ons in my life, comes this new opportunity that one wouldn’t be able to ignore. a call came from the bigger and more reputable hospital to review my resume again for possible placement.  but now again i stopped. and i shall wait.  not for any call from these possible employers.  but for the voice of God to  tell me what to do next.  He didn’t fail me last week.  He will not fail me ever.  meanwhile, my hands are full with what i love doing most and what God has assigned for me at the moment.  take care of my family. and do my art.  which i intend to do.  with or without the job offers that are coming my way.

“But seek ye first the kingdom of God, and His righteousness; and all these things will be given you besides.”  Matthew 6:33

praise God for all His grace and glory!  yesterday, i had an initial job interview with the chief finance officer of a reputable hospital.  today, i would like the whole world to know that i have been able to go through it all because of God’s unending mercy and greatness. 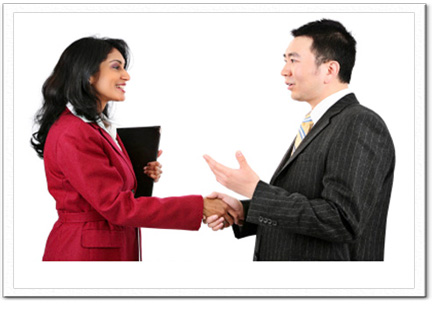 days before that i really was in a dilemma if i should go or not.  you see, i have another offer from a multinational company which i really preferred.  i would have rather waited for them to call first.  but there’s no way to be certain which really is a better choice. so again, i asked God for his guidance.  you know, let Him lay out all the  pros and cons. all i needed to do was sit still and quietly discern all the clues and do my best. so there during the course of the interview, matters of grave importance which was of no concern for me before were brought up.  and then, i had a better perspective.  no longer do i see choices in a one track point of view. i believe God showed me which way to go.  and i was glad that i let Him. as always.  what happens next?  guess i still have to find out and reserve the answers for my next blog.  but sure is all for the best.