“It is better to dwell in a corner of the housetop, than in a roomy house with a quarrelsome woman.” Proverbs 25:24

last night, my husband and i had such a hilarious time watching the movie ‘duplex’ on tv starring ben stiller (alex rose) and drew barrymore (nancy kendricks).  it’s about a newlywed couple who moves to their new home.  it was a dream house, perfect to raise a family in and ideal for a writer like alex who needed just the right mood to finish his novel. but there was just one problem, there lived on their top floor as a tenant an old woman, mrs. connelly.  at first, alex and nancy thought she was just an old lady and tried to get along with her.  but mrs. connelly became overly demanding by asking the couple to do chores and ran errands for her.  she was even such a nuisance rehearsing with her brass band and watching tv at top volume all night long.  because of mrs. connelly, nancy messed up with her magazine job and eventually lost it; and alex’s laptop with his finished novel burnt and ran over by a truck.  these major disasters to their lives caused homicidal fantasies that led to evil plans on how to finally get rid of the old lady.

so what was hilarious about all that?  it was the funny way that the couple’s story was told, highlighting how 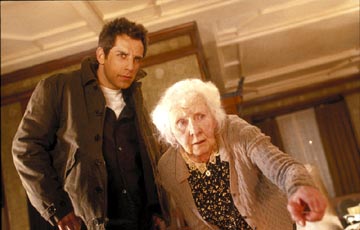 they tried to overcome each frustrating situation caused by mrs. connelly.  this is just a movie remember? but after the final scene was shown revealing how scheming the old lady was, we stopped and pondered.  how could she? mrs. connelly was just an old lady.  she’s not supposed to be a ‘treacherous witch’ anymore.  not at her age.  but that’s just one of life’s harsh realities.  evil chooses no age. it disguises itself to achieve its goal.  if not with age, maybe with looks, in other ways we’d always be surprise it can.  the movie also showcases how such nice people like alex and nancy, could be driven by such rage and forced to do bad things given the circumstances that they had gone through.  it was hilarious. because it was just a movie, remember?  but in real life, it is just one sad story.

One thought on “duplex”